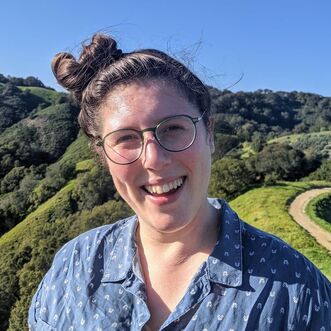 A German native, East coast transplant and polyglot, Lo (she/they) has occupied leadership and facilitation roles for over 12 years. Trained as an educator and clinical social worker, Lo’s work has always centered issues of power, privilege and oppression. She began organizing with Showing Up for Racial Justice (SURJ) Bay Area in 2015 and has been supporting white-bodied folks in developing racial literacy and anti-racist identities. Lo especially loves challenging those in the lives of young people, such as parents, educators, and administrators, to embody anti-racist practices in their homes, classrooms, and school-wide policies.

Currently Lo is building a private psychotherapy practice to support young LGBTQIA+ folks as well as white-bodied individuals who want to move past white guilt and deepen into their anti-racist commitment. Lo’s work is grounded in grassroots POC leadership, intersectional feminist theory and somatic approaches to the work.

Born and raised in Germany and living on the East coast for a decade, Lo now lives on unceded Ohlone territory in the village of Huichin also known as Oakland, California.